Play Baywatch at Casino Europa and get Up to EUR/$2,400 in bonuses per year. 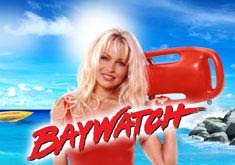 Wild symbol
The Wild symbol C. J. Parker (Pamela Anderson) can stand for any other symbol, except Scatter and Bonus, to create the best possible winning combo. There is also a separate payout for 3 or more Wild Pamela symbols on an active payline. During main game, Wild symbols appear stacked on reels 2, 3 and 4 - this means Pamela expands on the entire reel.

If 3 or more Scatter Baywatch symbols appear in any position on the reels during base game or free spins, 12 Free Games are triggered.

Rescue feature
Bonus symbols "Rescue feature" anywhere on reel 5 during base game trigger the Rescue bonus. Choose one of 2 Bonus options by clicking on your selection: CJ Parker Respin or Lifeguard Mini Bonus.

In the Lifeguard Mini Bonus, you are presented with a scratch card like wall with 15 lifeguard symbols, covered with sand. The symbols are uncovered one by one in attempt to match 3 of a kind and win your cash prize. Each lifeguard is worth a different cash prize. CJ Parker is always worth 10 times the total bet of the spin that triggered the feature, no matter if this is the winning symbol or not; Caroline Holden, Matt Brody and Neely Capshaws prizes are randomly chosen between 3x to 8x times the total bet.

Free Games
3 or more Scatter Baywatch symbols in any position on the reels during base game, activate 12 Free Spins with reel 3 stacked with lifeguards. 3 or more Scatters in any position on the reels during Free Spins, win 12 more Free Spins with the same features. More Free Games can be retriggered in this way infinitely except during lifeguard features spins. Lifeguard features cannot be re-triggered.

Caroline Holden feature
When Caroline Holden occupies the entire reel #3, 6 extra spins with all wins tripled are awarded, during which Matt Brody and Neely Capshaw don't appear on the reels at all but more Caroline Holden symbols are added to the reels. Wild symbols appear stacked on reels 2, 3 and 4.

Matt Brody feature
When Matt Brody covers the entire reel #3, 6 extra spins are awarded with the Matt Brody serving as an Extra Wild symbol. Before the 1st spin is completed, a Matt Brody appears randomly on reel 1 and remains frozen there till the rest of the feature. The same happens before the 4th spin and 6th spins are completed. Ordinary Wilds do not freeze and are not stacked. Scatters covered by Extra Wilds pay as Wilds.