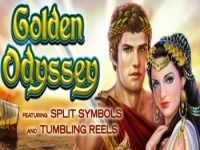 Golden Odyssey. Ages: 18+
The legendary Greek King of Ithaca is back and featured in the 5-reel video slot Golden Odyssey, by IGT. This free slot brings you through the tale of Odysseus after the Trojan War with his twelve war ships that got steered off course by a vicious storm. Could Odyssey resist the charms of the Sirens around Circe`s Island? If you can help restrain yourself from the temptations of the beautiful sirens, you may win some fantastic prizes!

Symbols on the reels include Odysseus himself, his wife Penelope, a beautiful Siren, a Wild Symbol, a Free Games Symbol, the logo and traditional letters from 10 through Ace. The game is set in a colourful casing that looks almost like an ornate theater stage.

Free Games Bonus
Get 3 Free Games scatter symbols anywhere on reels 1, 2 and 3 to trigger the Free Games. You`ll be rewarded with 6 up to 16 Free Games!

Split Symbols: During Free Games, the Odysseus acts as the high payer with prizes being paid out for hits of between 3 and 10 symbol hits. You might ask yourself, how can I hit 10 of these if there are only 5 reels? Well that`s because this game features IGT`s Split Symbols. These symbols are one symbol but instead of showing just one Odysseus on the tile, you`ll see 2 of them. This effectively counts as 2 symbol hits! Similar to Odysseus Split and Scatter Symbol, lady Penelope, the wife of Odysseus also comes as a split symbol, as does the Siren with the purple background, allowing you to hit up to 10 symbol hits in a single spin.